These two contrasting images were both taken in a shipyard in Marseille.

The Chain links representing many also how it fills the frame gives us the impression of many.  The two chairs around a Bar-B-Q looked very odd as we do not usually associate a Bar-B Q as an event for two people.  These were sparely placed in the image also help to give the impression of Few.

Horizontal Lines attract us to the window of the view from this lounge area.  One would expect such large windows to show an amazing view.  The view here is of a shipyard but the effect of the lines is felt.

This wooden plank and the natural lines of the wood takes us from the bottom of the picture to the top.  I liked the colours in this image.  I tried it in black and white and without adjustment  post production it did not have the same esthetic effect.  The lines are only one factor in how we feel and how we look at this image.

The most obvious of vertical lines people.  This religious procession in Malta caught my attention and the poles they are carrying only emphasise the vertical lines of the people.

This abstract image the bolts in a vertical line cause us to look along the image and I believe call our attention to it to consider what it is. 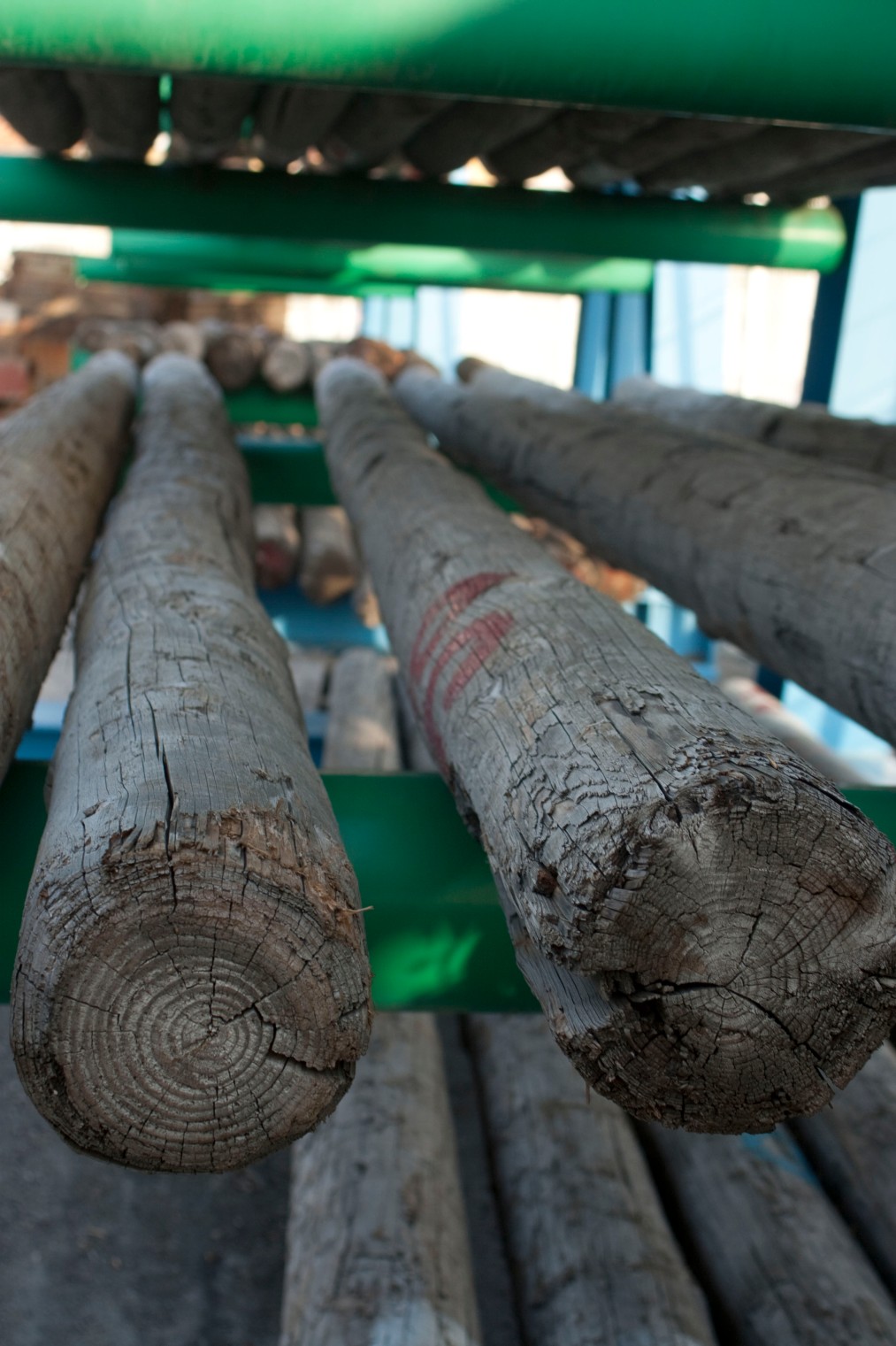 The image below was originally a horizontal image of a row of arches in a town in Italy.  I have changed it to black and white and turned 90 degrees as I like the effect it created.  I would like to spend more time on this image and also bring out more detail of the stripped paint which represents the decaying on this town and so much of which is evident in Italy although it adds to its charm as a tourist perhaps not for those living there.  It will be my aim to become more efficient at image editing in the future in order to do this. 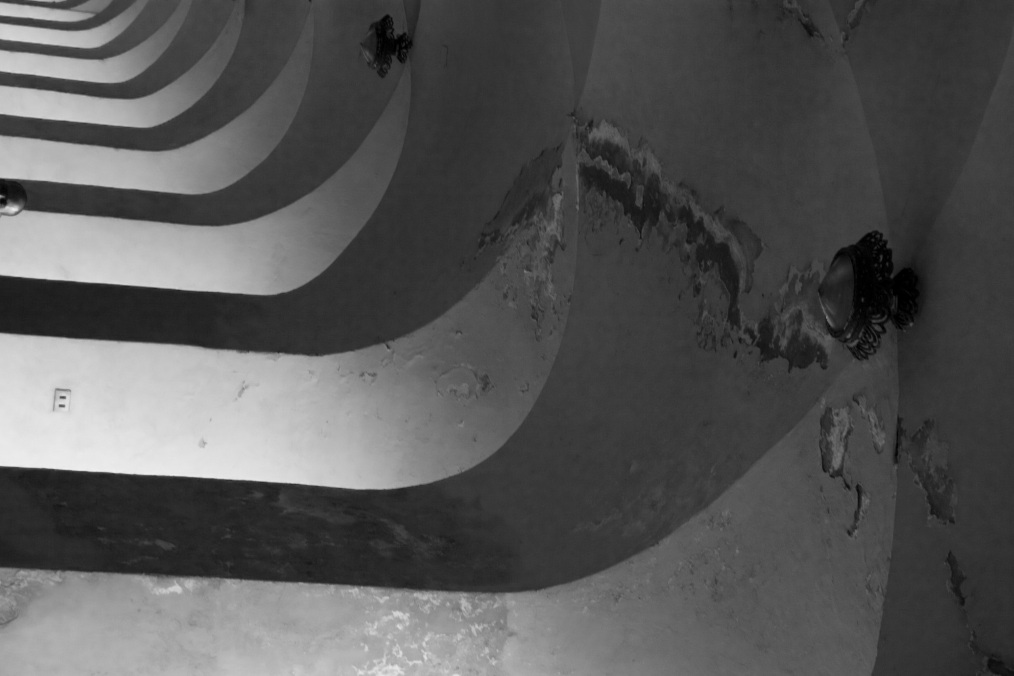 The image below was what felt like a tree funeral.  An area full of dried tree trunks used for commercial work lying around.  These particular horizontal tree stumps created a window into the urban world through

rusting bars where we could see the urban world.  This urban world is the cause of our disappearing forests and trees and I felt this image defined it while also showing strong lines. 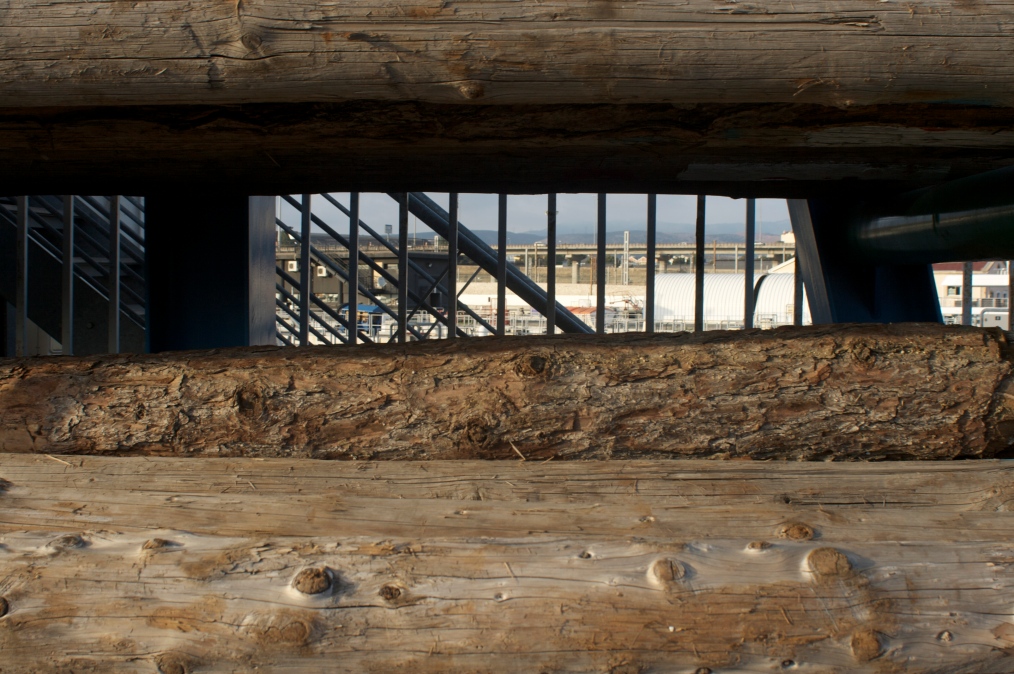 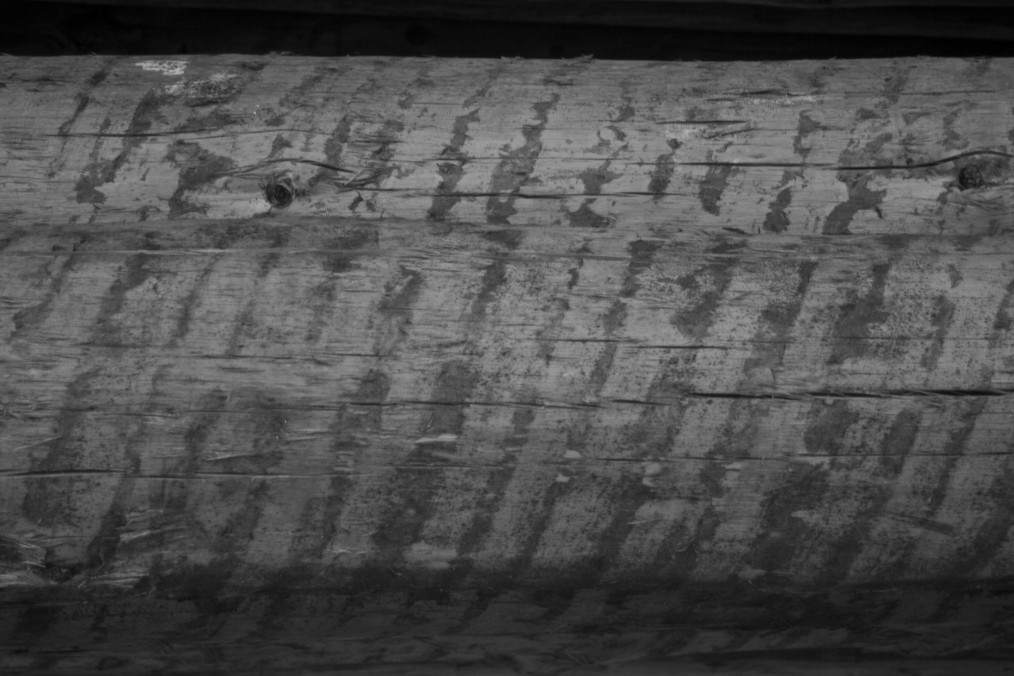 I originally took this as a Horizontal Image however perhaps the vertical/ Diagonal lines are more catching.  It is also difficult to have one type of line without the other.    All of the images are a combination thereof.

Again there is a curve in these lines which I 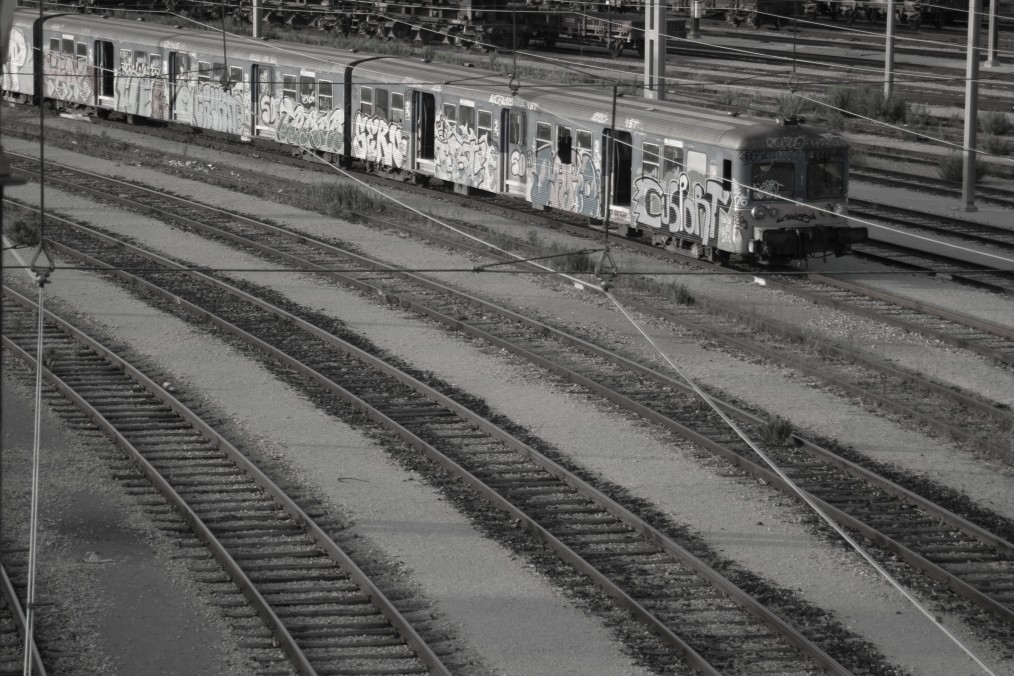 thought of after taking the image.  I guess this would have a different effect on whoever is looking at the image.

Contrast.  I went out looking in this urban setting of Tenerife, Santa Cruz.  Looking for straight and curved contrasts.

From the roof top of the hotel looking out over the city there were many architectural examples.  The rooftop gardens with people going by their day had many attractions.  Walking through town I was attracted by people on the public

benches first and then noted the straight and curved form of the benches. 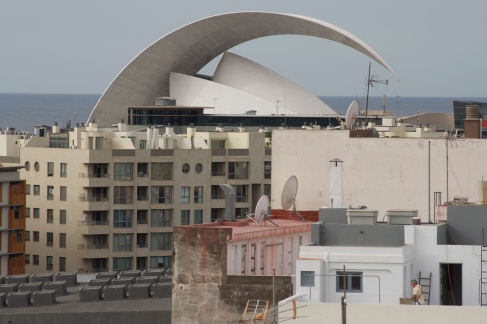 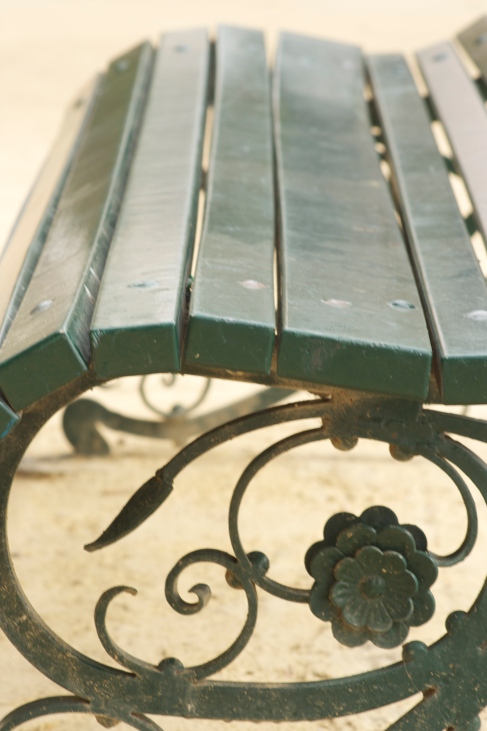 The curved form of the seat and the decorative legs with its curves. In contrast the lines of the bench seat which reach out to the people calling for someone to sit on it.

Continued research on this theme Antibes France during the Yacht show.

The best way I found of demonstrating light was with two different landscape scenes.  One which is bright daylight the other which is dark.  Although both of these are taken at dusk the image gives very different impressions.  One was taken on a summer evening the other winter.

at the advise of my tutor I am changing my light photo.  The photo above the saturation is terrible at the forefront and this does not help give the impression of light.

On the advise of my tutor I have changed these images.  He recommended that these images were too abstract to represent Liquid.  So I have added the above immage of waves crashing.  Hopefully this also is not too abstract if not I would add something more simple.

I have used a similar shot to represent solid the rocks the size and how imposing they are I hope this helps to give the impression of something solid. 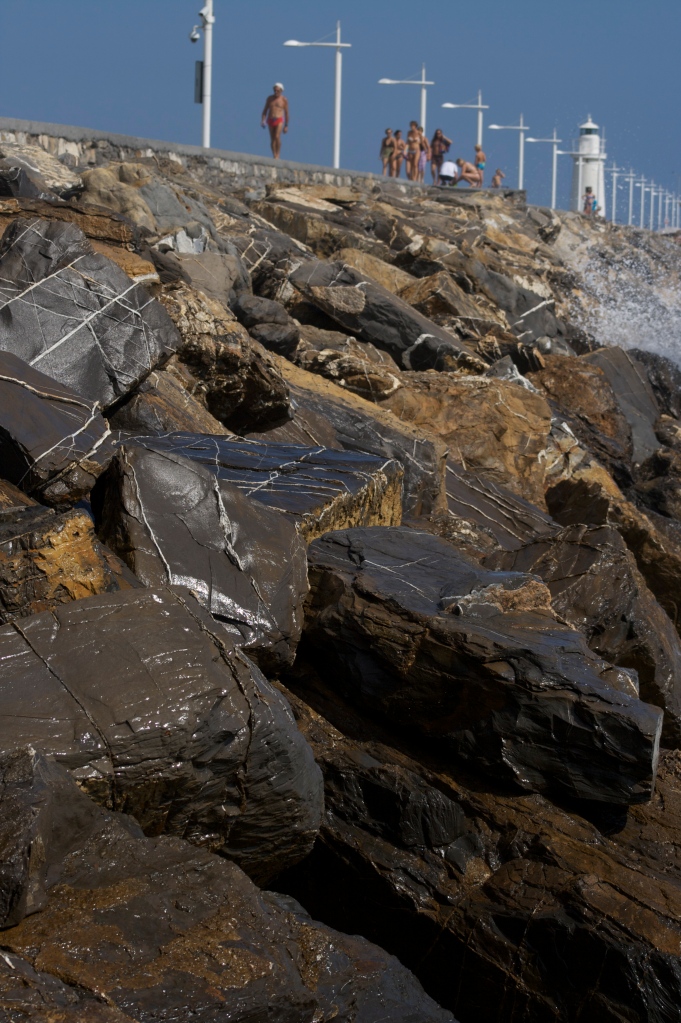 It is a horrible rainy day and I have decided perfect to go and take photographs of something liquid.

First I tried to portray the sheer amount of water coming down like buckets but found this is very difficult to catch with the transparency of the rain.  The results were not so good  I tried putting the camera on a tripod and getting lines which indicate the rain but really it added nothing to the shot.

Next I sat down in a cafe and photographed some people sitting down  in the cafe next door hiding away while the rain passed the droplets on the plastic separator between  cafes gave a sense of a rainy day and the cosiness inside however it did not give the impression of liquid which was my aim today.

I do like this photo perhaps it reminds me of home in Dublin with the rain.  The next thing that came to mind was umbrellas the rain dripping off the umbrella could that portray liquid so I have focused my attention on the passerby and luckily with the amount of rain there is no one is paying any attention to my happy snapping.

So in Contrast to liquid which I took outside on the street I have returned home to portray solid and have decided to use ice to do so.  I was working on some food photography at  the time for my husband and took advantage and set up some glasses with ice  I have taken many to get the correct light trying to avoid reflection on the glass.  Noting that when the ice created condensation it seemed like liquid so I have filled the glass to emphasise the squares in side.  To me the best image although it could use improvement was with the ice coming out the top of the glass as it emphasises that it is a mass on its own solid and does not need to be contained in the glass.  I am looking forward to feedback from my tutor as to whether estetically I have managed to communicate liquid and solid to him. 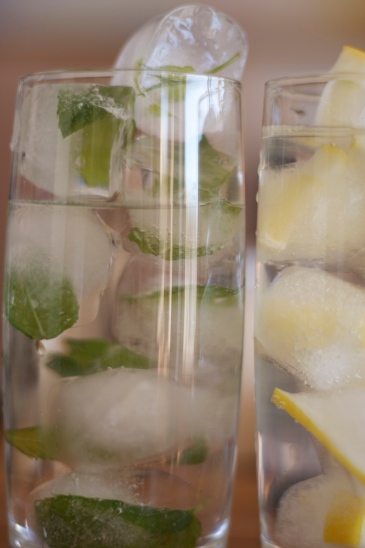 I was thinking about how to do this and find an interesting subject this time the subject found me.  I was photographing food when the image I took had a wafer thin light crunchy pastry  decoration on top.  The piece was so thin and light it seemed to float into the air.  I have tried to portray this so that you can almost see through the thin piece of food decoration.  The light tones emphasis the transparency and thinness.   Using a large aperture so that everything behind is out of focus otherwise this object would have almost gone unnoticed.

The second image of a beef fillet.  This is obviously much heavier than the transparent piece of wafer its thickness plays an important role within the photo of creating the desire to eat it.  In order to communicate the larger size/thickness of the fillet I have allowed it to take up a large proportion of the image 1/3 approximately and placed it central to give it more importance.  The darker colour of the meet and the accompanying vegetables gives it a more serious effect and helps portray how thick this piece of meat is.  If I were to photograph a sliver of beef carpaccio I would have used much more subtle lines and colours.

From doing this exercise I have started to think about why I do certain things and why certain things appeal to me aesthetically.  What different colours and shapes portray.  In the future when shooting food or other object I believe I would have more of an idea before hand as to how to set up the image rather than shooting until I find something that works. 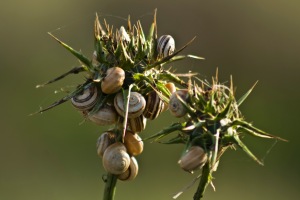 Nature has provided an unexpected example of blunt/pointed.

I have found too very different images to emphasise the difference between pointed and blunt.  One is of snow on the mountains which also the crisp colours and sharp contrast with the rest of the image helps to give the emphasis of the points on the mountains.  I took several images feeling also that the cloud formations which were soft would give  the contrast of the pointed mountains however the colour contrast between the sky and the mountains made it difficult to photograph both together I have attached two photos to see which works better.

In contrast nearby I found the tops of some sailboats at a nearby sail school smooth and round gives the impression of blunt. 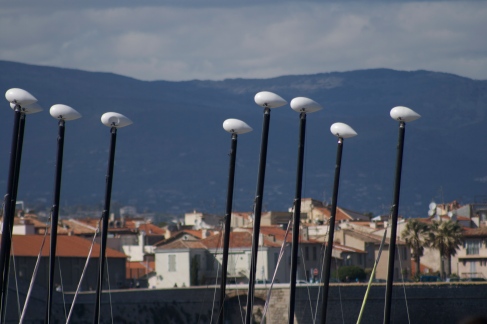 I am walking around Antibes France looking for some inspiration for this assignment.  There it was in the form of a street performer playing music with glasses. I think he started to get worried after I was photographing him for ten minutes.  I had a few difficulties with this shot one I did not have a tripod so in order to portray the movement of the street performers hands I needed a slow shutter speed but I did not want movement in the glasses.  There was very strong sunlight its a sunday afternoon and he is placed right in the sun and this is also reflecting off the glasses.  There is a lot of room for improvement but in the end here are the best shots I got.

Both these shots are taken on my 28/80 zoom lens on a 400d canon camera. In order to get this movement I have taken the shot at 1/6th of a second.

The first photo the hand almost looks paused it is emphasised by the central position and it being the prime object in the photo.  The second photo the light reflections on the glass almost give the effect of movement as to the movement of the hands  I have cropped the photo to remove the empty space I had on top which makes the image seem busier.